The NVDB road network is combined with NVDB feature types in a wide range of applications and products. You may utilize a pre-made product, query the NVDB api, or use the “show network” toggle switch in Vegkart version 3. 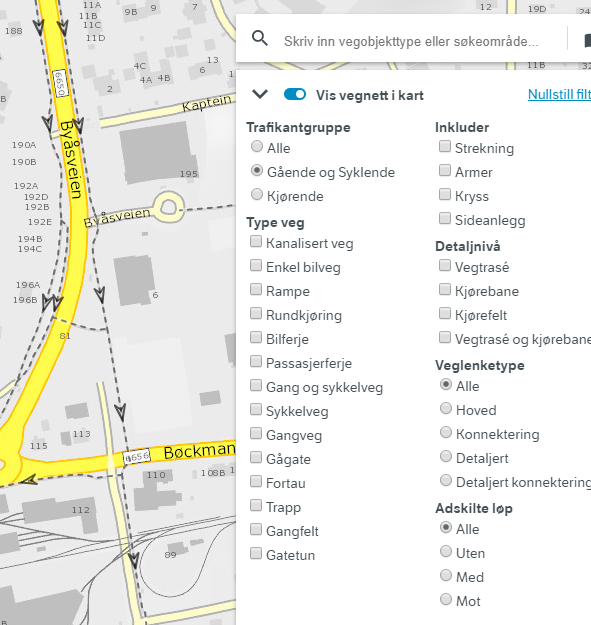 For route planning and navigation

The NVDB road network and relevant feature types (such as restrictions and speed limits) are joined into products suitable for route planning. These products are equivalent, but not identical. They are updated approximately 10 times each year.

Elveg has been the official route planning product since mid-1990’s, although with several modifications. The format is Norwegian SOSI. Elveg is distributed through the Norwegian mapping authority metadata and distribution portal.

The Norwegian Road Administration willingly shares the road network data that we use in our own route planning application. For historical reasons, we’ve had to produce these data in both esri file geodatabase and spatiaLite formats. At some point, we will scrap support for the esri file geodatabase. There is some rather crude and rudimentary documentation here.

Currently, we publish these data through two parallell channels:

We’ve had some minor quirks with the first one, as soon as we feel confident the quirks are gone for good we’ll drop support for ftp.

In NVDB, the road network is defined through a combination of link sequences, links, nodes and ports. Not all of these details are relevant for every applications. The links alone are plenty for most, but not all use cases.

Veglenkesekvens = Link sequence are a-historic (i.e. never expire), and have a linear reference system that always starts at 0 and ends at 1. New link sequences are added as needed, but they never expire.

Veglenker = Links belong to a link sequence, but can evolve over time. As the road network evolves, the links are typically cut into smaller pieces or are replaced by other (usually shorter) links. But expired doesn’t mean deleted - we preserve this part of history, so you can go back in time and see what the network was then. Todays active road network is the subset of links with start date < today < expiry date. Links obey the linear reference of the link sequence they belong to, i.e. their start and end position is between 0 and 1, 0 <= start position <= end position <= 0.

Think of link sequences as a list of links, and some of those links may be expired (but not deleted).

Links are connected through nodes. Technically, this connection goes through a port - but this level of detail is usually not nescessary for proper use of road network data.

The link sequence ID combined with the non-dimmensional linear reference system (i.e. a number between 0-1) gives you a persistent, permanent reference to the road network of NVDB. This reference may point to an expired link, meaning that the road has been physically replaced, but the reference is still valid.

NVDB has three different topology levels, but not everywhere in the network: The more detailed levels are added as needed. 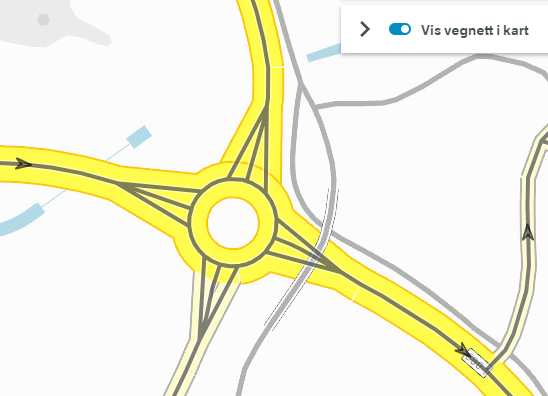 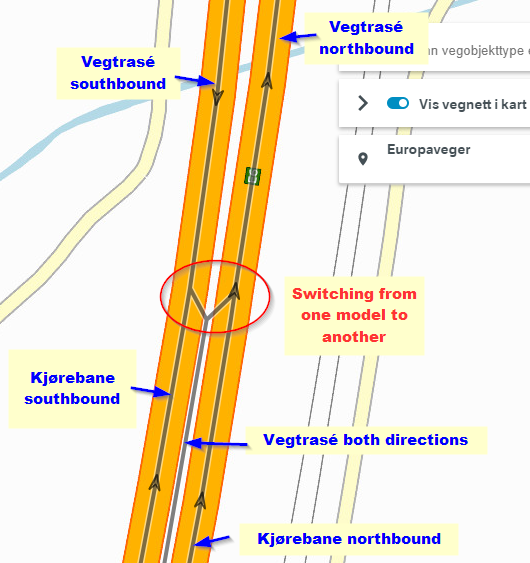 Above, we show two different ways to model motorway in NVDB. In the southern part, we have a model with a main center line (vegtrasé) in between two _kjørebane links. In the nortern part, we don’t use the lower topology level kjørebane, but have TWO vegtrasé, one per direction. Both are perfectly valid representations of NVDB road network. However, flipping between these two models does cause inconvenience for users. NVDB features are always connected to the uppermost level vegtrasé. In the souther part, you need to derive if a feature applies to which one - or both - of the kjørebane links through lane codes (feltkoder). In the northern part, it is evident because each vegtrasé link only describes either northbound or southbound part of the road.

To aid with sorting out these two different and somewhat confusing data models all road links have the property “adskilte løp” (separated lanes), which either has the value “Nei” (no) for the southern part of this example, whereas in the Northern part we have adskilte løp=Med (with) and Mot (against), respectively.

This end point supports most, but not all of the filters described under the ./NVDB features. See the documentation for details.

We have a slightly more user friendly version of the road network available through the “Segmentert vegnett” (segmented road network) end point https://nvdbapiles-v3.atlas.vegvesen.no/vegnett/veglenkesekvenser/segmentert. It is called segmented because we add information about road reference and other administrative data through a segmentation process, so each link may be split into several tiny pieces.

This end point supports most, but not all of the filters described under the ./NVDB features.

The NVDB api V2 has a similar representation, with similar filtering capabilities.